Call for an estimate

A master of traditional bookbinding, Scott Kellar has been working with books for over 35 years. Introduced to bookbinding as a hobby in 1972, his commitment to the craft was immediate.

In 1974 he began his training at Monastery Hill Bindery under master binder Joseph Zuffant. In 1976 he went to the Newberry Library where he undertook further training and studied bookbinding and library conservation. Later, he became the Collections Conservator at Northwestern University Library where he established and developed the Library´s Conservation Lab. After twelve years of experience in two of Chicago´s primary research institutions he established his current studio in 1994.

Our studio provides conservation services to major academic institutions such as the University of Chicago, DePaul University, Northwestern University, University of Illinois, the Chicago Historical Society, the Chicago Botanic Gardens and the Archdiocese of Chicago Archives.  Our private client list includes Warner Bros., Rogue Pictures, The Chicago Tribune, Kurt Gippert Bookseller, Riverdale Police Dept., the American Dental Association and Les Enluminures Ltd. among many others. Scott has taught bookbinding for many years, occasionally teaching an advanced bookbinding class at his Chicago studio. He is also a member of Designer Bookbinders and The Guild of Book Workers, exhibiting his unique design bindings (see Portfolio section) in national and international exhibitions.

Excerpts from The Thread That Binds by Pamela Leutz*: (her interview with Scott Kellar)

How did you start in binding? What brought you into bookbinding? And where did you grow up and live?

“I was born in Missouri and raised in Seattle, Washington. We moved back to Missouri when I was nine. As far as how it relates to my bookbinding, my parents encouraged me to read. My television watching was limited for which I will be eternally grateful. I think that this had something to do with my interest now in books. I´ve always liked to work with my hands… I got this manual, Basic Bookbinding, by Arthur Lewis, and I tried to figure out how to bind books from it. That my first contact with bookbinding. I loved it. It was never completely off my mind from then on.”

Is there a certain type of bookbinding that you are partial to?

“I guess I like any job that I can do well. I like restoration work. I like to successfully complete a challenging job. I like it to come out right. All along the way I´m not often sure, and I have to work through it and make a lot of decisions- let it sit overnight, and comeback to it, and then see that it´s done and it´s right. That´s really satisfying.”

What are your gifts and abilities that make you a good bookbinder in your perception?

“I think I have hand skills and dexterity, which is not uncommon, although not every body has it. Experience, being in it as long as I´ve done it, being able to use that experience to solve problems and recognize problems, remember solutions, combine them to come up with new ones. Always keeping an ear to the ground about what other people are doing, new things being used, new ideas. I think that I have an aesthetic sense as well.”

Comprised of 21 interviews of independent bookbinders, The Thread That Binds documents Pamela Leutz´s quest to learn about the lives of representatives of this field. Each chapter tells a different story as Leutz discovers the challenges, successes, and “common threads” among each of the binders. Includes images offering a closer look at these bookbinders’ studios, as well as photographs of the bookbinders themselves. 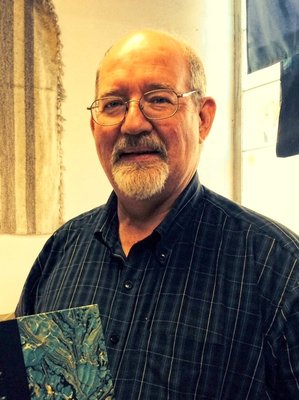 Sleep in Absolute Peace Wake up to Bright Sunshine